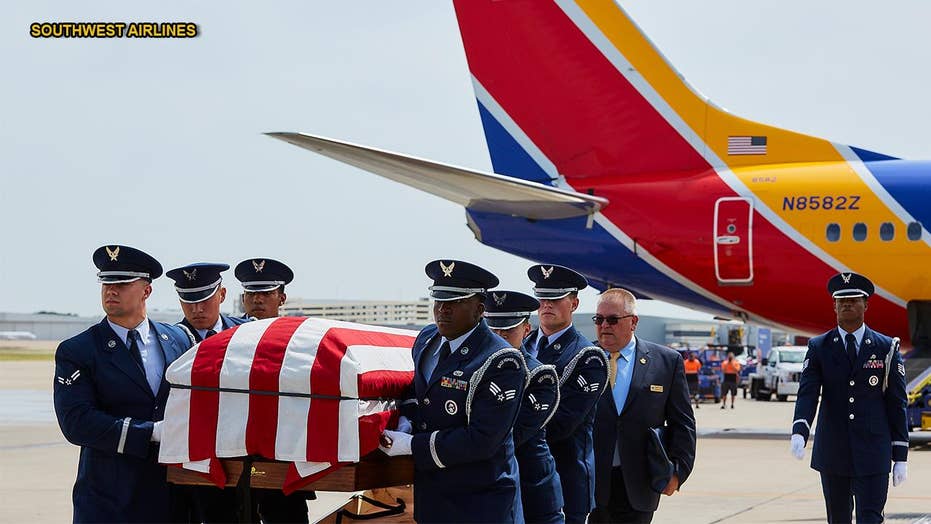 Col. Roy Knight Jr was shot down in combat in 1967 in Vietnam and, after reportedly ejecting from the plane, his body was never found. After his remains were identified 52 year later, his body was returned to the United States by his son, a pilot with Southwest Airlines.

Travelers at Dallas Love Field Airport in Texas were able to witness the emotional moment a Southwest Airlines plane carrying the American airman touched down. According to a reporter who was present, the entire terminal fell silent as the scene unfolded.

Before leaving for Vietnam, Col. Knight said goodbye to his family, including his 5-year-old son, at Dallas Love Field Airport. It was reportedly the last time he saw his family. (Southwest Airlines)

Col. Roy Knight Jr. was shot down in combat in 1967 in Vietnam, Southwest Airlines confirmed. He reportedly ejected from the plane, but his parachute may not have deployed. A search was conducted for his body, but it was not found at the time.

His remains were recently found and identified, and a return trip to the United States was set up. Who initially discovered the remains was not shared.

According to Global News reporter Jackson Proskow, a gate agent from Southwest Airlines made an announcement before the plane landed. The agent filled the waiting travelers in on Col. Knight’s story, including two very important details.

WOMAN FINDS HEARTWARMING NOTE ON HER MCDONALD'S RECEIPT: 'I CAN'T BUY MY SON BREAKFAST SO I BOUGHT YOURS'

Before leaving for Vietnam, Col. Knight said goodbye to his family, including his 5-year-old son, at Dallas Love Field Airport. It was reportedly the last time he saw his family.

Now, 52 years later, he was finally being returned. Even more amazingly, the pilot flying the plane was his son.

According to Proskow, as the plane landed, the crowd remained silent. They watched as a casket draped in an American flag was unloaded and was met by people who appeared to Col. Knight’s family and a military guard.

Proskow described the scene as peaceful, beautiful and “a privilege to watch.”

A spokesperson for Southwest Airlines sent Fox News the following statement: “When Southwest Airlines Captain Bryan Knight was just five years old, he made a trip to Dallas Love Field to send his father, Col. Roy Knight, off to the Vietnam War. That day in 1967 would be the last day he saw his father as just a few months later Col. Knight’s jet was shot down and he went missing in action for decades.”

The statement continues, “Earlier this year, Captain Knight learned that his father’s remains were positively identified which began the mission of returning Col. Knight to his home in North Texas. Today, his son flew his father home to Love Field where he was received with full military honors to express a nation’s thanks for his dad’s service to our country. Our Southwest Airlines family is honored to support his long-hoped homecoming and join in tribute to Col. Knight as well as every other military hero who has paid the ultimate sacrifice while serving in the armed forces.”