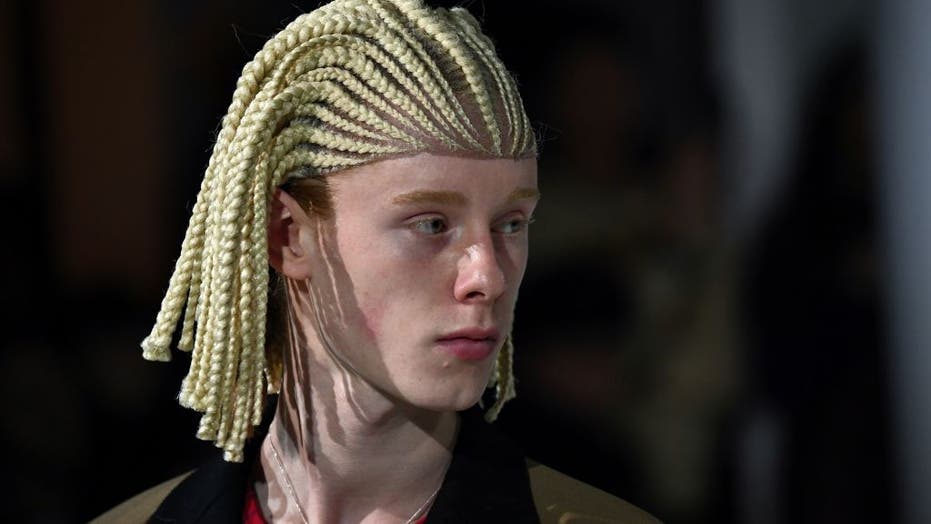 Commes des Garçons, a Japanese fashion house, is being accused of cultural appropriation after sending models down the runway in wigs designed to look like cornrows.

The show took place on Friday at Paris Fashion Week and showcased several different male models, many of whom were white, strutting down the runway modeling the brand’s latest Homme Plus menswear collection. Nearly all of them were seen sporting what appeared to be ill-fitting cornrow wigs.

The criticism was swift on social media, with some deeming it a “racist” show, and others declaring that Commes des Garçons was “canceled.”

Japanese fashion label Comme Des Garçons faced backlash for the look, which appeared on the runway at its Paris Fashion Week show on Friday. (Anne-Christine Poujoulat/AFP via Getty Images)

“I’m outraged and disgusted by your models' choice of hairstyle knowing where it originated from. Where is the real representation?!?” one user wrote on Instagram.

“Cancel culture incoming y'all really messed up on this one, man,” another user said.

“They wanna make money off the culture but don’t wanna show love and respect to the people,” someone else commented.

Others, still, appeared to be just as offended by the placement and quality of the lace-front wigs.

Critics on social media called the move "racist," while others declared that Commes des Garçons was “canceled.” (Anne-Christine Poujoulat/AFP via Getty Images)

“I can’t even be mad because I know y’all did this for attention but come on … the lace? At least do it right,” someone else added.

On Friday, Canadian fashion designer and model Tani also called out the brand in a Twitter post that has been liked more than 3,300 times.

Commes des Garçons has not publicly commented on the backlash, nor shared any photos from the show on its Instagram page as of Saturday afternoon. The fashion house, however, had once come under similar scrutiny in 2018, following accusations from fashion writer Marin Lerma that it had not hired a black model in the two decades prior.

That same year, Kim Kardashian also faced criticism for arriving at the 2018 MTV Movie and TV Awards with her hair in cornrows.

"It’s not cute to appropriate my culture," one critic wrote on social media at the time. "Your privilege is really showing."