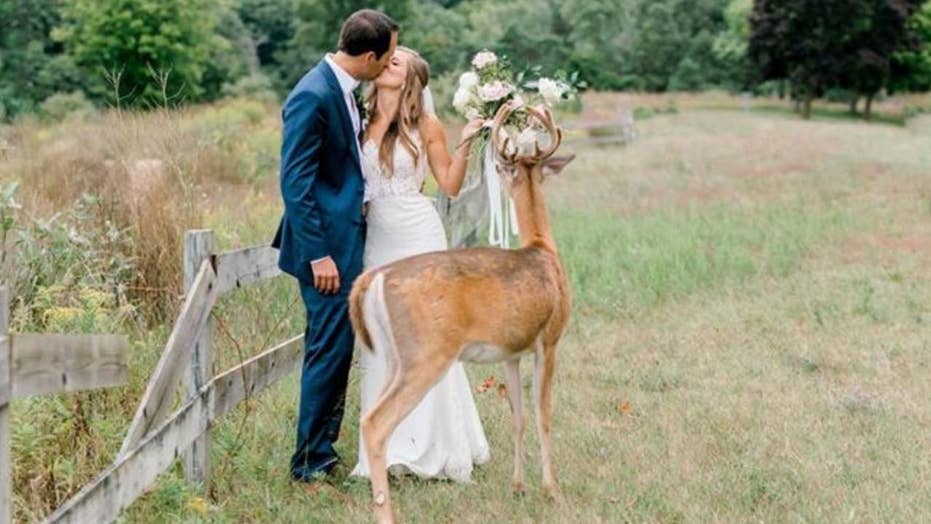 A newlywed couple posing for their wedding photos in Michigan were interrupted by an uninvited guest. A deer joined the young couple during their photo-op and even tried to nibble on the bride’s bouquet.

While they posed for their wedding photos, a couple in Michigan were interrupted by an uninvited but hungry guest. Shockingly, the intruder decided to snack on the bride’s bouquet, which is normally considered bad wedding etiquette. However, since the hungry intruder was actually just a curious deer, the couple was actually pretty amused by the whole situation.

The moment was caught by the wedding photographer and uploaded to Laurenda Marie Photography’s Facebook page. It was captioned, “Deer: 1, Bouquet: 2.”

MAID OF HONOR SPORTS T-REX COSTUME FOR SISTER'S WEDDING: 'I REGRET NOTHING'

The post continues, “When the field you want to take bride & groom portraits in has an overtly friendly deer...you roll with it until the deer decides the bouquet is lookin' like a good snack. Morgan & Luke, you rock. Much more from your beautiful day to come!”

The photos show the couple happily posing near Saugatuck Dunes State Park, FOX 47 reports. As they stand near an old wooden fence, a curious deer suddenly appears and quickly takes notice of Morgan’s bouquet, which had been created by Melissa Anne Floral Co.

While the photos didn't go according to plan, the couple and photographer rolled with it and ended up with some truly unique shots. (Laurenda Marie Photography)

The animal eventually climbs over the fence and starts munching on the flowers, much to the couple’s amusement. Based on the photos, the deer apparently got to finish off its bouquet-meal.

At weddings, it’s tradition for the bride to throw the bouquet and whoever catches it will be the next to get married. It’s not clear what happens to the guest that eats the bouquet, but maybe this deer has a love connection coming its way.