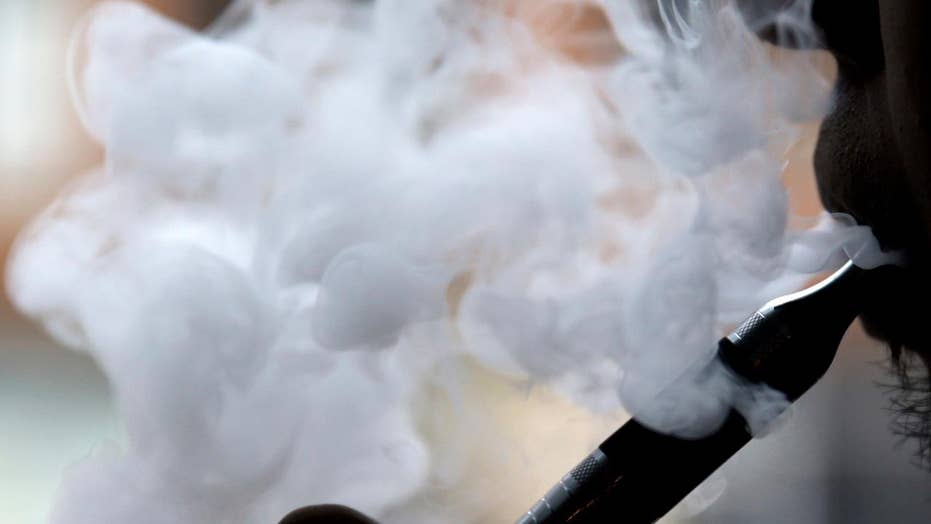 Dr. Marc Siegel breaks down what's behind the growing number of vaping-related illnesses.

In a news release, New York State Department of Health officials said tests showed “very high levels” of vitamin E acetate in “nearly all of the cannabis-containing samples” that were analyzed by the Wadsworth Center, a state laboratory associated with the health department.

New York has seen 34 cases of severe pulmonary illness linked to vaping in patients ages 15 to 46. All the patients used at least one cannabis-containing device before becoming ill, but reported using other vaping products as well.

“At least one vitamin E acetate containing vape product has been linked to each patient who submitted a product for testing,” officials said in the news release.

Thirteen samples were collected from eight of the patients.

“These samples have been tested for a range of substances, including THC and other cannabis-derived cannabinoids, nicotine, synthetic cannabinoids, opioids, and pesticides," they said. "Products tested include a variety of labels and packaging. Many are suspected to be counterfeits of recreational cannabis-containing vape products available in other states."

“It is premature to say any one of these is the cause of pulmonary disease associated with e-cigarette use."

The compound was not found in nicotine-containing devices, officials said, adding the affected products are not a part of New York’s medical marijuana program.

Though vitamin E acetate is now a key focus of the New York Department of Health’s investigations, federal health officials told Fox News it is only one of the “multiple substances being investigated” at this time.

“It is premature to say any one of these is the cause of pulmonary disease associated with e-cigarette use,” Courtney Lenard, a spokeswoman for the Centers for Disease Control and Prevention (CDC), said in a statement.

Additionally, Michael Felberbaum, a spokesman for the Food and Drug Administration (FDA), cautioned that “more information is needed to better understand whether there’s a relationship between any specific products or substances and the reported illnesses.”

“We are looking into potential leads regarding any particular constituent or compound that may be at issue,” he said in a statement to Fox News, adding the federal agency has more than 100 samples they are testing for a “broad range” of chemicals.

“No one substance, including Vitamin E acetate, has been identified in all of the samples tested,” he said. “Importantly, identifying any compounds that are present in the samples will be one piece of the puzzle but will not necessarily answer questions about causality. The results from the FDA’s laboratory analysis will be shared with the respective states to aid in their investigations and will help further inform the federal response.”

Vitamin E acetate is typically used as a nutritional supplement; the compound, often in oil form, is derived from vitamin E. Though it’s not known to cause harm when it’s ingested or applied to the skin, the same may not be true in connection to the lung illnesses.

Michelle Francl, a chemistry professor at Bryn Mawr College, explained to The Washington Post that vitamin E acetate, when heated to high temperatures, becomes a vapor. As it cools, it returns to its original state.

When ingested through a vaping device, the compound returns to an oil form when it reaches the lungs, potentially causing illness because the lungs are not equipped to handle substances other than gases.

“We haven’t looked at the toxicity of vitamin E in the lungs. The lungs are designed to exchange gas molecules; they’re not designed to be exposed to other chemicals,” said Laura Crotty Alexander, lung inflammation and e-cigarette researcher at the University of California at San Diego’s School of Medicine, to the Post.

The CDC recently said there are 215 illnesses across 25 states. The first vaping-related death was reported last month in Illinois. A second was recently reported in Oregon.

Patients experienced similar symptoms in the days to weeks before becoming ill, such as shortness of breath, pain associated with breathing, cough, fever, nausea, and vomiting.

"We urge the public to be vigilant about any vaping products that they or any family members may be using and to immediately contact their healthcare provider if they develop any unusual symptoms," said New York State Health Commissioner Howard Zucker in a statement.  "In general, vaping of unknown substances is dangerous, and we continue to explore all options to combat this public health issue."