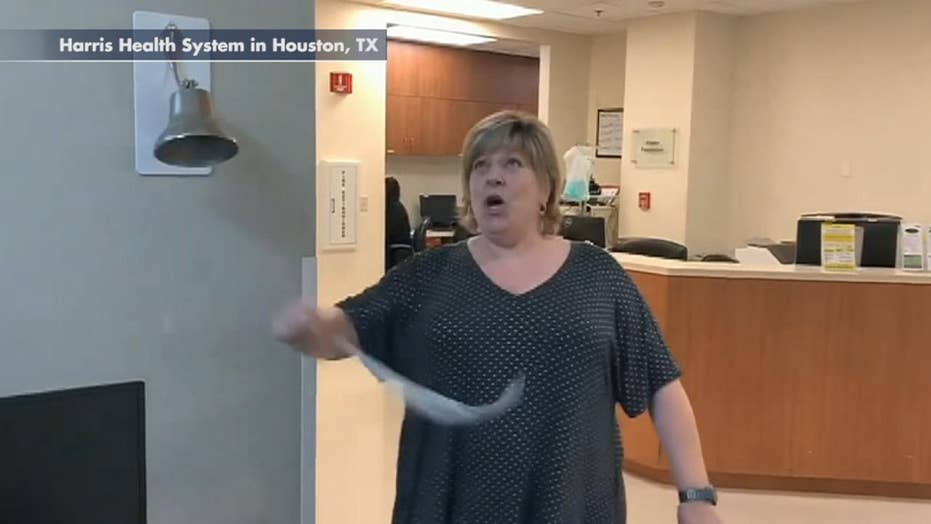 Raw video: Texas woman celebrating her last round of radiation treatment was so excited she broke the hospital's signature bell.

A Texas woman celebrating the end of her radiation treatment was so excited to ring the hospital’s signature bell that she broke it.

“I was like, ‘Oh my god, I broke the bell!’ I thought, you know, I didn’t think I had any strength left in me, but obviously, I do!’” Darla Jaye, who was diagnosed with breast cancer in February, said, according to Fox 26 Houston.

Harris Health System, which is where Jaye had been receiving treatment since May, posted the video on their Facebook page where it received over 2,100 views since Monday. Jaye also posted photos and video of the scene writing that it was the best way to celebrate being cancer-free.

Jaye can be seen walking up the bell and giving it a good ring before the rope attached to the bell flies off to everyone’s amusement.

“Congratulations to Darla Jaye!” the hospital posted. “She completed her last round of radiation treatment for breast cancer. She was so excited, she broke the bell!”

Jaye commented on the video and thanked the nurses and oncologists for “saving my life and helping me battle through cancer. I am eternally grateful. God Bless You All.”