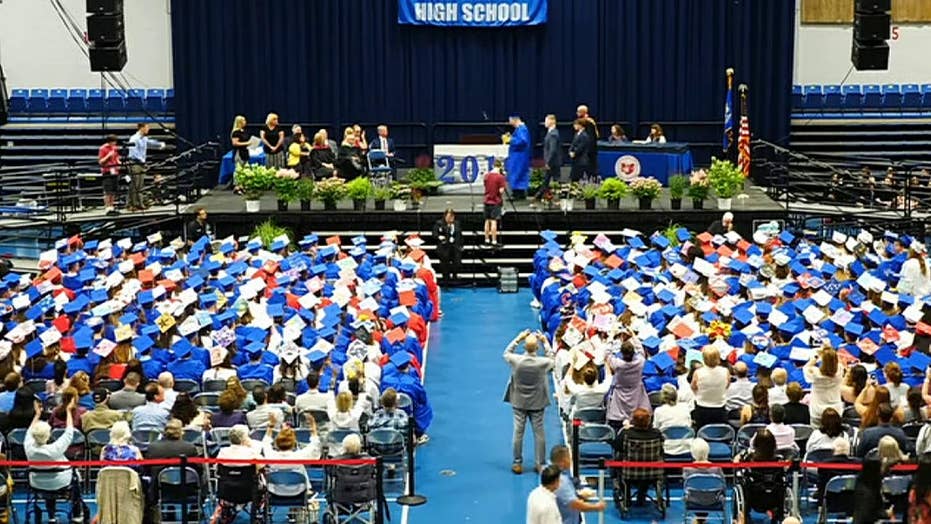 The students applauded silently so as not to spoil the graduation of their autistic classmate.

The silence was golden at a high school graduation ceremony in New York last week as classmates gave a student with autism and noise sensitivity a silent ovation.

Students barely touched their palms together in largely inaudible claps with hushed enthusiasm for their classmate Jack Higgins, who held his fingers to his ears as he walked on stage to accept his diploma from Carmel High School in Putnam County, N.Y., anticipating raucous cheers.

Instead, his classmates stood quietly and allowed him to enjoy his moment in silence.

Lou Riolo, the principal of the high school, told Fox News on Thursday that originally, Higgins' parents, Barbara and Pat, requested that their son participate in graduation alongside his special education teacher, Erin Appelle.

"Erin brought it to me," Riolo said. "Knowing Jack is Autistic and nonverbal and is hypersensitive to loud sounds and crowds at times there were some concerns."

He said Appelle had planned with aides to set up a practice in an auditorium.

"After thinking on it for a few days, I came up with the idea of asking the entire auditorium to stay silent so that Jack could receive his diploma," the principal said. "We planned on doing it immediately after the singing of the National Anthem because we knew Jack sitting there with all the commotion for over 45 minutes would be too much."

Riolo, a Carmel alum who taught for 26 years and has been a principal for five years, said he initially ran the plan past a few other school faculty members, all of whom were supportive.

"I did run it past our Assistant Principal Mr. John Fink because he would be honest if he thought it was as I called it 'Shooting the moon.'  He loved it.  I also informed our [superintendent] Mr. Andy Irvin and before I finished his answer was 'I love it, let's do it!'  I met with Barbara and Pat, Jack's parents, and they thought it was a great idea," Riolo said.

He added that despite the possibility that Higgins would become overwhelmed if the auditorium got too loud, they decided to try anyway, saying he trusted his students to try their best to make the situation comfortable for their classmate.

"I know my school my students and community," Riolo said. "They always step up."

Riolo said he couldn't be prouder of his students.

"Their actions of standing up in honor of their classmate was their idea. It was not rehearsed.  It was genuine," he said, adding that he was "not surprised but in awe of their caring."

Higgins parents were "ecstatic and overcome with happiness for their son," who is set to attend Ability Beyond in Chappaqua, N.Y., a program tailored to students with disabilities.