No – it’s not because of the caffeine.

That’s the simple answer to a question that has been brewing on the internet about Starbucks lately: Why can’t you order a Venti Nitro Cold Brew?

STARBUCKS-OBSESSED MAN VISITS 15,000 LOCATIONS IN 22 YEARS, AND PLANS TO HIT ALL

The Nitro Cold Brew, a “velvety-smooth coffee” that is slow-steeped for 20 hours and infused with nitrogen, has been one of the most popular menu items since it first launched at the Reserve Roastery in Seattle in 2015. The drink is on track to expand nationwide by the end of 2019.

However, cold brew lovers have slowly started to notice they can’t get their Nitro-fix supersized (or, in Starbucks speak, venti-sized). 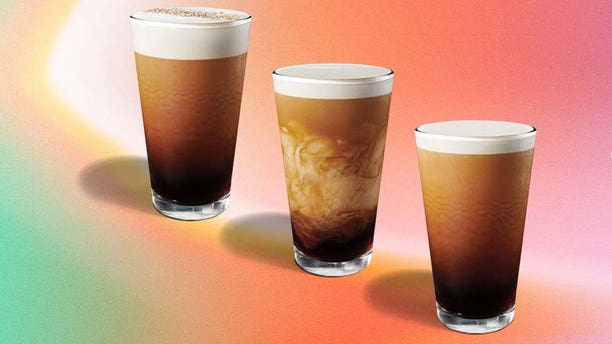 The Nitro Cold Brew is not available in Venti sizes, prompting a wave of theories as to why Starbucks made that decision.  (Starbucks)

The quandary has led to a slew of conspiracy theories suggesting it’s the frothy beverage’s caffeine levels, or it’s Starbucks trying to prevent customers from “getting such a good deal” on the cold brew by limiting the sizes they can purchase, seeing as the Nitro Cold Brew is served without ice, unlike the other cold brew or iced coffee options.

However, a spokesperson for the coffee mega-chain told Fox News that the caffeine content – which clocks in at 280 milligrams for a grande, and is nowhere near the most caffeinated option at the store – is not the issue. It’s the way the product is made that is the issue.

The statement from Starbucks to Fox News claimed Nitro Cold Brew is only served in tall and grande sizes to offer customers “the best experience of the beverage” as with venti sizes, the drink loses its “nitro cascade” – meaning the drink loses the creamy, frothy texture and "cascade of bubbles" that makes the Nitro version different from its cold-brewed counterparts.