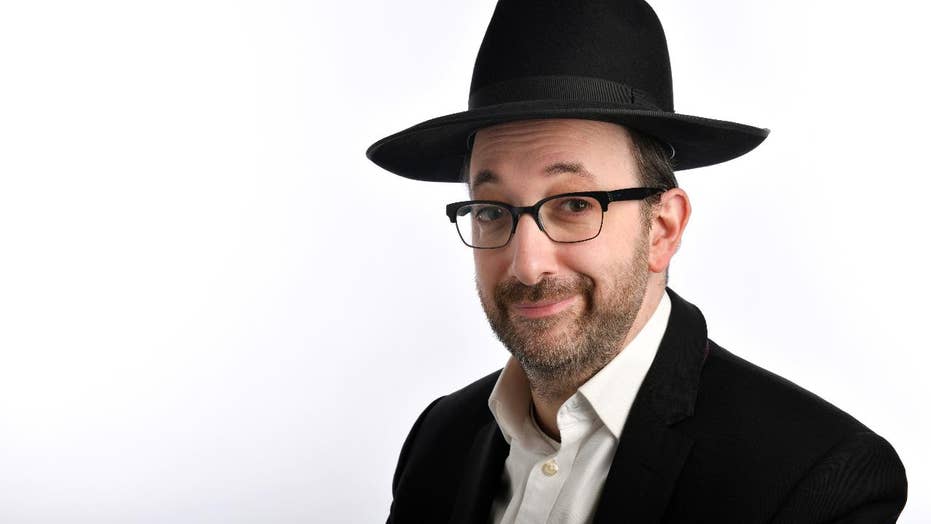 Ashley Blaker, the U.K.’s only Orthodox Jewish comedian, tells Fox News how he works in television without owning one.

NEW YORK – Ashley Blaker has spent the past two decades working in the entertainment industry, producing some of his native England's top TV programs -- but the stand-up comic doesn't own a television set.

Blaker, an Orthodox Jew, refrains from many material items that do not line up with his faith. So how did he end up in show business?

The comic, who is starting his "Observant Jew" tour in Edinburgh this week, did not always observe all of the tenets of his faith. He told us about growing up in a traditional Jewish household, attending synagogue on the Sabbath but not observing the holy day by going shopping in the mall afterward.

It was only when he and his wife married that they were given a free membership to an Orthodox synagogue in London where he was befriended by a rabbi who invited him to participate more and more in Orthodox life.

"By the end of the week I was hooked in," Blaker joked. "It was too late, I couldn't get out."

But now the BBC producer told Fox News he is a fully observant Jew who eats "strictly kosher" and goes to "synagogue three times a day."

"I live in this very strict Orthodox world I have lots of other restrictions as well," he told us. "For example, my children go to a school where we're not allowed to own televisions. Like a lot of people in the Orthodox world, we don't have a TV and things like that so I think I'm the only person in the world who works in TV but doesn't actually own a TV."

But that hasn't stopped the father of six from working alongside some of Britain's top entertainers, like Russell Brand and Matt Lucas.

He and comedian Sacha Baron Cohen are contemporaries and attended the same Jewish school growing up. He also hosts the BBC radio show "Goyish Guide To Judaism."

Blaker performs for audiences all over the world -- both Jewish, and not. (Meron Persey)

Blaker's routines generally focus on poking fun at the various restrictions he follows as part of his Jewish faith. But Blaker, who performs for Jewish and non-Jewish audiences all over the world, said his comedy routines are for everyone.

"I would consider myself a comedian who is Jewish rather than a Jewish comedian, but in truth, they're completely bound up with each other," Blaker said. "Because I talk onstage whether I'm performing for Jews or whether I'm performing for non-Jews; I am talking about my experience, my life which is all about the life of an Orthodox Jew, so it's all tied up together."

One stringency Blaker follows is not shaking hands with members of the opposite sex apart from his wife; it's a rule he routinely jokes about in his stand-up.

All jokes aside, Blaker said while he's faced challenges reconciling his faith and his job, overall, people respect him for staying true to his beliefs.

"Obviously, there's been lots of challenges over the years; not being able to work on the Sabbath... I've turned down lots of work," he said. "But I generally find, and I think it's really important to stress, that people are very respectful of that and that you will actually win more respect from people by staying true to that rather than saying, 'OK, just this once I'll make an exception.'"

"People have a lot more respect when you stay true to what you believe in," shared Blaker.

Faith & Fame is a regular column exploring how a strong belief system helps some performers navigate the pitfalls of the entertainment industry.