When the Emmy nominations were released Tuesday, the HBO fantasy saga — plagued by awkward editing blunders and negative fan reactions to its finale — was announced to be in the running for television's top honor for its eighth and last season. "Game of Thrones" has previously won three Top Drama Series trophies, including at the 2018 Emmys. 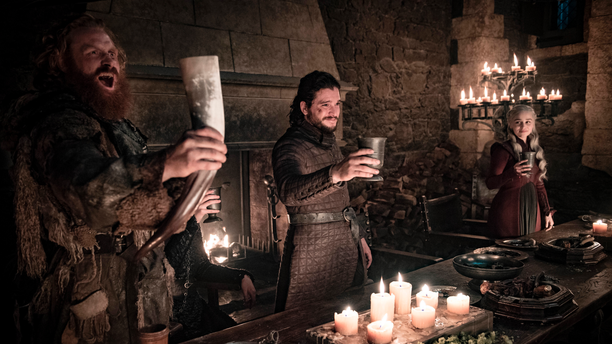 This image released by HBO shows Kristofer Hivju, from left, Kit Harington and Emilia Clarke in a scene from "Game of Thrones." "Game of Thrones," "Veep" and "The Big Bang Theory," three major series that wrapped last season, will find out with Tuesday's nominations if they have one more chance at Emmy gold. (Helen Sloan/HBO via AP)

Emilia Clarke earned her first best drama actress nomination after earning a trio of supporting nominations for her role of Daenerys Targaryen, with Kit Harington earning a nod for his turn as Jon Snow. Four of the six nominees for Best Supporting Actress in a Drama Series were from "Game of Thrones," with Sophie Turner, Maisie Williams, Lena Headey and Gwendoline Christie each getting a nod.

Julia Louis-Dreyfus nabbed a nod for Best Actress in a Comedy Series for "Veep."

Other drama series vying for top honors at September's awards include "Killing Eve," ''Pose," ''Bodyguard," ''Ozark" and "This Is Us," the NBC drama that could be the sole broadcast series to earn a top bid.

"Veep," which holds a trio of best comedy series Emmys, is in the hunt for its final trophies after wrapping its seven-season run.

"The Big Bang Theory," which ended this year after 12 seasons, was shut out of acting nominations (though they earned directing and editing nods), as was "Modern Family," which will air its final season this year.

The 71st Emmy Awards will air Sept. 22 on Fox, with the host yet to be announced. "The Masked Singer" judge Ken Jeong and "The Good Place" star D'Arcy Carden announced top-category Emmy nominations Tuesday at the Television Academy in Los Angeles. The full topline nominees are listed below.

LEAD ACTRESS IN A DRAMA SERIES
Emilia Clarke, "Game of Thrones"
Viola Davis, "How to Get Away with Murder"
Mandy Moore, "This Is Us"
Robin Wright, "House of Cards
Jodie Comer, "Killing Eve"
Laura Linney, "Ozark"