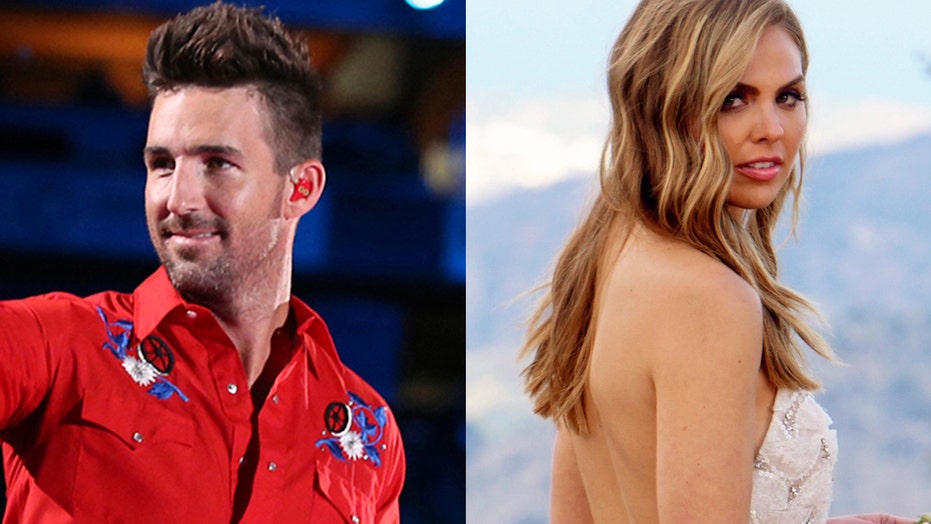 “Bachelorette” star Hannah Brown responded to country singer Jake Owen after he debuted a song that he says was inspired by her recent return during Peter Weber’s premiere episode of "The Bachelor."

On Thursday, Owen, 38,  took to Twitter live to share the story of getting inspired to write the song after watching the premiere with his wife earlier in the week. During the premiere, the “Dancing with the Stars” winner, 25, surprised everyone by returning to talk with the new crop of women vying for Weber’s affection and to get some closure with him about their relationship.

"Monday night, my girlfriend had the damn TV on and all you heard about on the new Bachelor was Alabama Hannah, it was just Alabama Hannah everywhere,” Owen explained. “She won’t go away.”

'The Bachelorette' stars Hannah Brown and Peter Weber reconnected on the series premiere of 'The Bachelor.' (ABC/John Fleenor)

The singer noted that he met Brown during her season of “The Bachelorette” and actually likes her. However, he said that her situation with Weber inspired him as it made for a good country song. He explained that anyone can relate to giving, “somebody multiple opportunities to take you as a lover” and being rejected.

'BACHELOR' STAR PETER WEBER RECALLS SEXUAL ENCOUNTER WITH HANNAH BROWN: 'I DON'T LIKE THAT IT DEFINES ME'

“This has nothing to do with the actual Bachelorette. This is just everyday life,” he said before launching into the lyrics, which were written from Weber’s perspective.

He continues: “I been out here in California, I’ve been soaking up the sun / There’s lots of pretty ladies, and I can’t pick just one / I’m flying high, I got peace of mind, I already raised the bar / Now you’re showing up here tonight, who do you think you are?”

He concludes the track with a reference to Brown’s “Dancing with the Stars” win as well as a nod to her infamous windmill hookup with Weber.

“Well I guess you think you messed up since you seen me moving on / Thinking we could pick up, right where we left off,” the song continues. “But you got to lay in the bed you made, and I hate to let you down / Girl this ain’t no windmill, we can’t go round and round.”

'BACHELOR' SPINOFF 'LISTEN TO YOUR HEART' TO AIR ON ABC

He ends the video by once again noting to fans that he doesn’t mean any disrespect toward Brown. Fortunately, the reality star took the song in stride, taking to Twitter soon after it was posted.

“Well, this is one way to get a song written about you. This is some catchy shade @jakeowen,” she wrote.

“It’s hilarious and even though it’s like a diss at me the whole time, I was tapping my foot along to it and laughing. You need to check it out!” she said. “Jake, let me know when you need me for the music video.”

For those unfamiliar, Brown chose Jed Wyatt at the end of her season and the pair quickly got engaged. However, when she discovered that he had a girlfriend back home, she called things off. During the “After the Final Rose” special, she asked out the runner-up, Tyler Cameron, but the relationship never really took off.

Weber was third, but her appearance on “The Bachelor” clearly got Brown thinking that perhaps he should have been first. When Weber came backstage to discover her crying, the duo finally got a chance to talk things out and even hinted that there may still be hope for a romance between them.