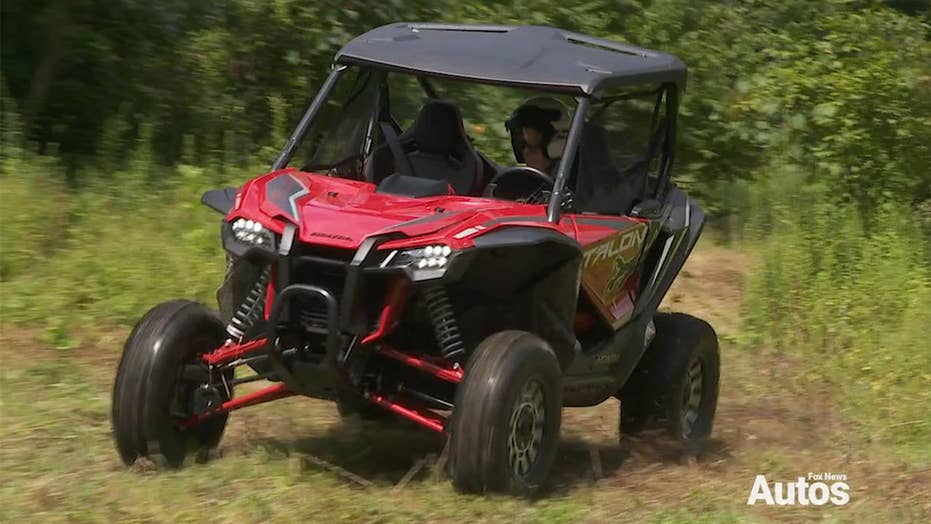 Honda is racing into the sport side-by-side segment with the Talon 1000X. Fox News Autos editor Gary Gastelu hits the dirt to see how it handles the rough stuff.

The 2019 Honda Passport is the automaker’s most capable off-road SUV, but the company makes a 4x4 that’s a little more radical.

It’s the new Honda Talon, the first sport side-by-side from Honda’s powersports division. Honda revealed it alongside the Passport at the 2018 Los Angeles Auto Show, pitching them as a perfect pair. It's also the closest thing you'll get to a two-seat Honda sports car these days. Just not a street-legal one.

The Talon is powered by a version of the 999cc twin engine used by the Honda Africa Twin adventure bike and puts out 104 hp in this four-wheel application. Unlike the high performance side-by-sides it matches up against that use CVT transmissions, the Talon features a six-speed dual-clutch automatic. Honda is hopeful that its quick shifts and more direct-feeling power delivery will help set it apart, and that it will prove to be more reliable than the notoriously problematic CVTs. A clutch temperature indicator light is included to inform drivers when they’re overdoing it and should take a break.

The Talon also has a 4x4 drivetrain that can be operated in rear-wheel-drive or four-wheel-drive and is equipped with a low range transfer case and brake-actuated limited slip traction management on the front differential. Paddle shifters behind the steering wheel allow for manual operation of the gears in any mode.

The 2019 Talon is available in two models, while four-seaters are on the way for the next model year. The current lineup includes the 1000X that I tested and the 1000R. The big difference between the two is the suspension setup. The 1000X has a narrow track and 15 or so inches of wheel travel aimed primarily at trail driving and rock crawling, while the 1000 R has a wider stance, about 18 inches of front and 20 inches of rear wheel travel and was optimized for high-speed running and jumping in wide open spaces.

The Talon 1000R features a wider track and more suspension travel than the 1000 X. (Honda)

The interior is constructed entirely of weather-resistant plastics and the driver’s seat is adjustable for legroom and has plenty to offer. A glove box, 12-volt outlet and two cup holders are the extent of its amenities, and the short cargo deck can handle loads up to 299 pounds.

The 1000X rips off the line when you step on the gas, and quickly zooms toward its electronically restricted 74 mph top speed. The suspension uses adjustable Fox Racing shock absorbers and absolutely flattens out rough surfaces and whoops while maintaining excellent body control at high speeds. The steering is responsive, and it’s easy to slide the tail around on slippery surfaces, although Honda recommends taking sharp turns slowly.

The approximately 1,500-pound Talon can’t defy the laws of physics, and is still a little tippy at the limit, as side-by-sides tend to be. But those limits are impressive. That said, I have seen one roll onto its roof and can report that the safety cage didn’t budge.

At low speeds, the transmission engages smoothly off idle, which isn’t always the case with dual-clutch units. A hill-hold function is offered and the four-wheel disc brakes are excellent, although you barely need to use them. One of the other advantages of the transmission is that it provides a ton of engine braking when you let off the throttle, and you can do most driving, even the enthusiastic kind, with one pedal.

Overall, the Talon is a thrill ride that should keep a lot of Honda fans from defecting to other brands, which is exactly what was happening when they didn’t have a choice. That is, the ones who can afford this kind of fun.

The Talon 1000X costs $19,999 and the 1000R goes for $20,999. That’s a couple of grand more than some similarly-powered sport side-by-sides, but Honda is banking that its reputation for quality will justify it for a lot of customers.

For those looking for more power, like that provided by the 181 Polaris Rzr XP Pro, Honda has teamed up with Jackson Racing on a factory-approved bolt-on turbocharger kit that will bump up the Talon to around 160 hp, although pricing hasn’t been released.

To promote it, Jackson Racing will be building a competition version of the Talon to run in the Baja 1000 and other cross-country events, but the standard Talons are available now and competitive in their retail segment.